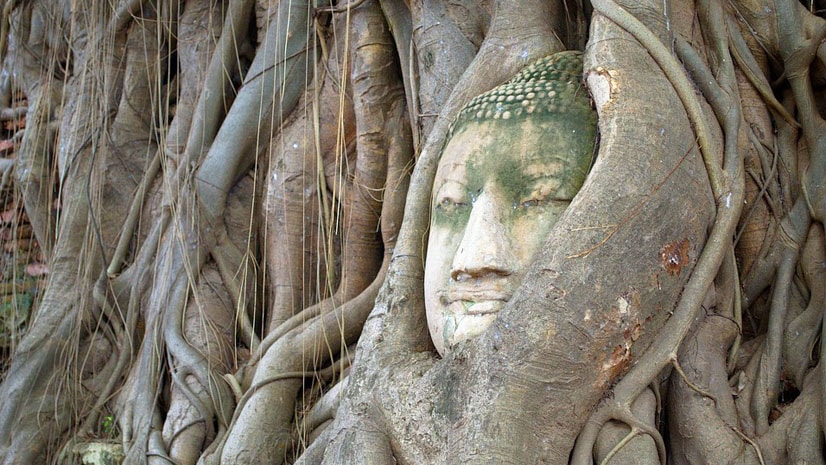 Ayutthaya, once upon a time was a great empire in its time. Found by King Ramathibodi I (also known as King U-Thong) in 1350, the Kingdom of Ayutthaya rose, conquered Sukhothai, and even defeated the Khmer Empire, becoming the leading empire at its peak in the 17th Century.

Ayutthaya is said to be the second capital city of Thailand after Sukhothai. In the 17th Century, the kingdom was one of largest kingdom in world, home to millions of people, and was one of the important trading hubs in the world. They allowed foreign traders to set up villages outside the wall of the capital.

The fall of Ayutthaya began after the 17th Century when the Burmese-Siamese war that began in the middle of the 16th Century became worse. In 1767, the Burmese succeed to enter the capital city of Ayutthaya and the city was burned down.

How to Go to Ayutthaya Historical Park?

Ayutthaya is located around 85 km to the north of Bangkok. Getting to Ayutthaya from Bangkok is possible by bus, train and boat.

Bus from Bangkok to Ayutthaya

Air Aran Patthana is the bus operator that provides the express bus service from Bangkok to Ayutthaya. The bus from Bangkok will depart from Mo Chit 2 at 8AM and estimated to arrive in Ayutthaya by 9.10AM. In total, the journey will take around 1 hour and 10 minutes.

However, Air Aran Patthana bus will terminate in Wang Noi, Ayutthaya. The drop-off point is not really convenient as it is located around 30-40 minutes away from the historical park.

Train from Bangkok to Ayutthaya

Boat from Bangkok to Ayutthaya

The weather in Thailand, as usual, is hot throughout the whole year. However, it will be slightly cooler from November to January. Many recommend going in December, but expect more crowd as December is the high season to travel in Thailand. Nonetheless, the weather will still be hot and humid.

Apply your sunscreen; bring your hat and other necessities to protect you from the scorching heat of the sun.

However, do note that Thailand will have a wet season from July to October. If the weather is bad, it might tamper your plan to visit the historical park. Still, most of the time the weather should be fine.

Usually, tourists take an Ayutthaya day trip from Bangkok to see the historical park. Some would hire a tuk tuk for one day and others would book a tour package. The tour is possible by feet but if you want to save budget but still visit the park conveniently, many suggest renting a bike for the tour.

Bike can be rented from many locations in the park. If you stay in any hotel nearby, they might also offer this service for their customers. Renting a bike would cost around 50-100 THB per day.

If you plan to hire a tuk tuk to visit Ayutthaya Historical Park, haggle for a one-day trip and decide which temple you want to visit to the driver. The cost should be around 200THB per hour.

You can use the map below as your orientation guide. 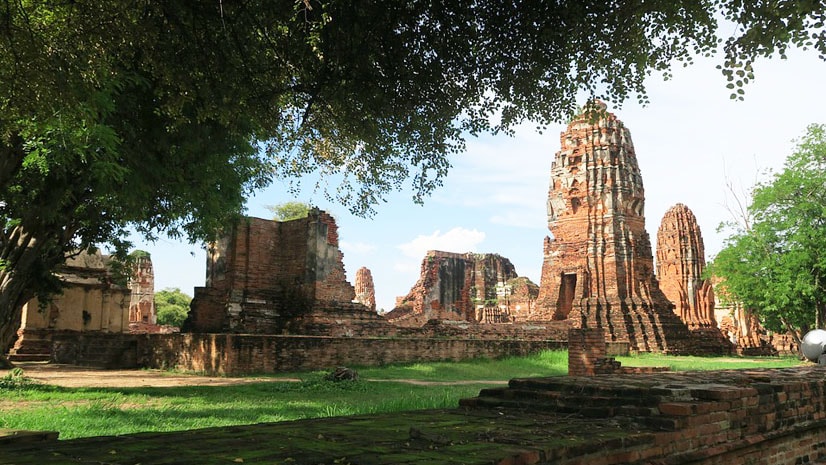 Wat Mahathat (not to be confused with another Wat Mahathat in Sukhothai), is a one of the Temple of the Great Relics. The temple was believed to be built in the 14th Century, and was the center of religious activities during the Ayutthaya period.

Having the Buddha relics enshrined here, Wat Mahathat was one of the most important monasteries in Ayutthaya Kingdom and was home to the Supreme Patriarch; the leader of Thai Buddhist monk.

Based on the large dimension of the base area, Wat Mahathat seems like a huge temple back in the day. However, since the Burmese burned down the temple in 1767, we can only imagine the greatness of the temple by seeing what is left and restored of Wat Mahathat.

Other structures you can find around these main buildings are smaller viharas and chedis. 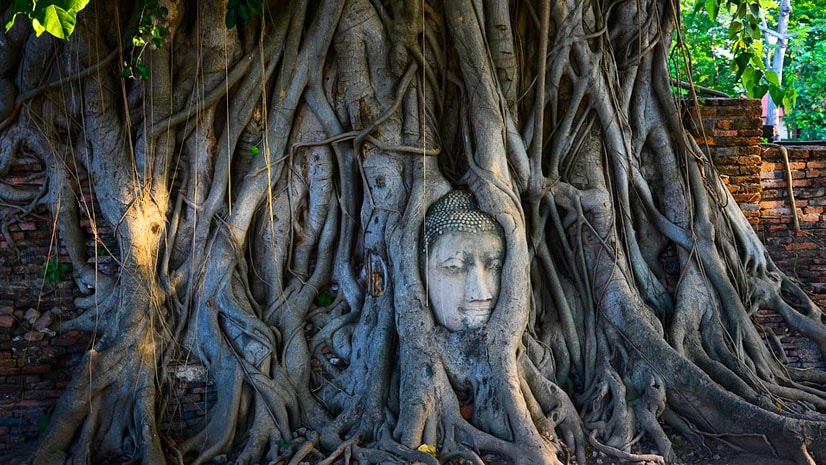 When the Burmese attacked Ayutthaya, many Buddha images became headless. This Buddha head was found entwined between the roots and has become Wat Mahathat’s highlight for the tourists.

No one sure of how it happened. Some said that it was abandoned by the thief and after years gone by, the tree naturally grew around the head and entwined it. 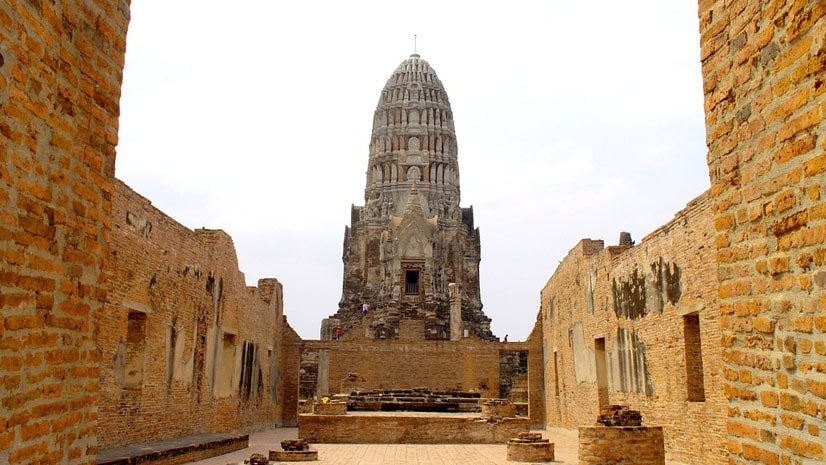 Wat Ratchaburana is located just beside Wat Mahathat, on the map –to the north of Wat Mahathat. It is also called the Monastery of the Royal Repairs.

According to the Royal Chronicles of Ayutthaya, Wat Ratchaburana was built in the 14th Century. In that year, when King Intharacha I (r. 1409-1424) became ill and passed away, two of his sons fought for the throne. They fought on an elephant and both died in the battle leaving the throne to another son of Intharacha I named Chao Sam Phraya.

Even more, special thing about Wat Ratchaburana is that there is a crypt accessible by a staircase leading you down to see the inside of the main prang. During the digging and restoration of the ruin, they found relics and other precious stones and items in crypt. The restored items are now being displayed in Chao Sam Phraya National Museum. 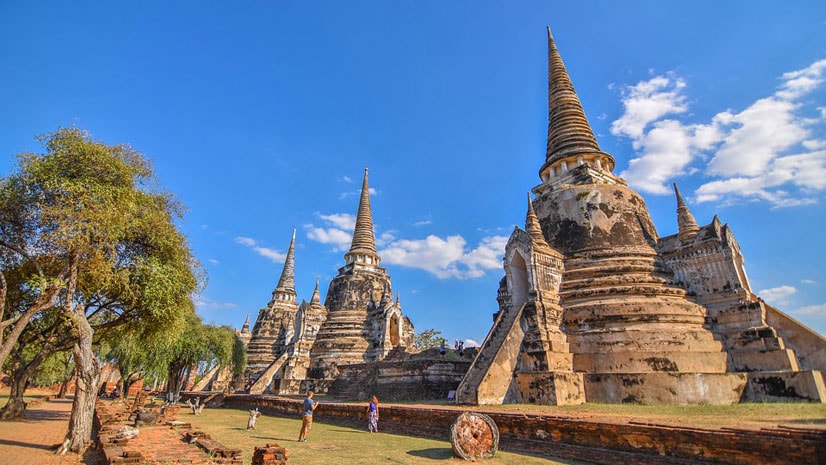 The structure in Wat Phra Si Sanphet kept on being added over the years. More Buddha images made of gold and other precious stones were installed in the Royal Monastery. In addition, the number of chedi to keep the remaining of the royal family also increased.

A Royal Vihara was built to the west of the three main chedi in Wat Phra Si Sanphet, accompanied by two smaller vihara on each side of the Royal Vihara. Being part of the Royal Palace, Wat Sri Sanphet is considered the most important religious site in Ayutthaya period. 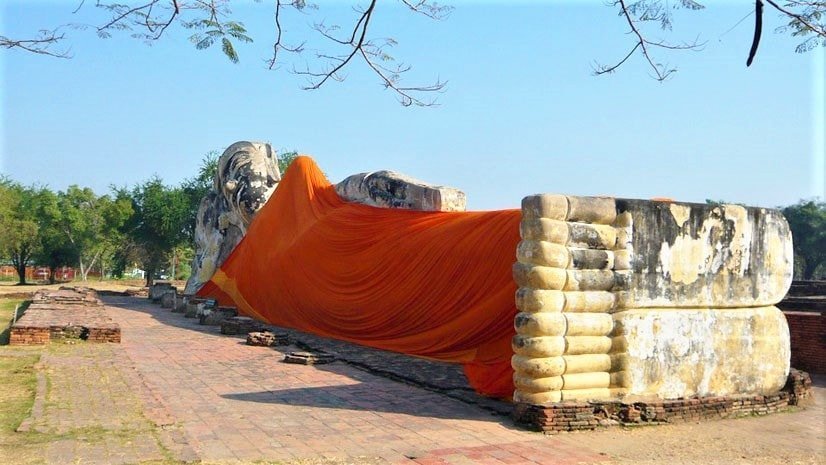 Wat Lokaya Sutha is located to the west of the Old Grand Palace. The base of the temple suggests that the ruin once upon a time was a huge monastery. The highlight of this temple is the massive image of the reclining Buddha on the western part of the temple. The reclining Buddha image in Wat Lokaya Sutha is the largest one in Ayutthaya, with height of 8 meter and width of 42 meter. The Buddha image is facing the west.

Songkran is an annual festival in Thailand to celebrate Thai’s New Year. This festival usually takes place every year from 13 April until 16 April and celebrated all over Thailand. In Ayutthaya, Songkran festival usually involve offering foods to the monks in Wihan Phra Mongkot Bophit located nearby the Wat Phra Si Sanphet. After that, the water festival also includes the elephants in water splashing activity.

Experience Loy Krathong, a lantern festival in Thailand with your friends or family. Join the locals to light up the Krathong and release it to the Chao Phraya River.