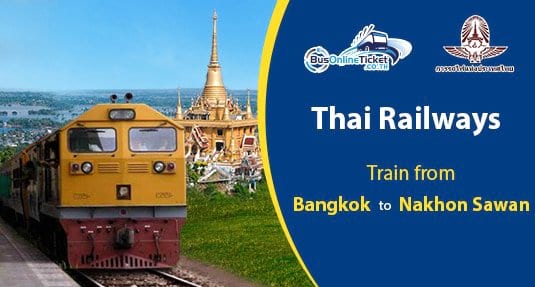 Nakhon Sawan is known as the province where the Ping river and Nan river meets at Pak Nam Pho and then flows together into the Chao Phraya river. Although Nakhon Sawan is not a popular tourist spot, the place still has its own charms and attractions. There are many temples to visit, aquarium, Bueng Boraphet Bird Park and more.

Below is the SRT train timetable for train tickets that can be booked online at BusOnlineTicket.co.th. Train departing from Bangkok have three pick-up points. Please choose your pick-up point to see the schedule:

Reminder : You must print out the E-Ticket sent to your email. Without the printed ticket, you might not be able to board the train. Tickets shown from the phone or tablet might not be valid.

The distance between Bangkok and Nakhon Sawan is approximately 245 km. The travel duration can be short or long depending on the type of train that you choose. Also, if you take train from Don Mueang Train Station, the travel duration is shortened by half to an hour. Approximately, the Bangkok to Nakhon Sawan train trip can take around 3 to 5 hours to reach its destination.

Generally, the Special Express train is the fastest train followed by Express train and the Rapid train. You can check the estimated arrival time in our booking page to make sure you do not arrive at an inconvenient time. However, even if estimated arrival time is after midnight, many prefer to take the sleeper train to have a comfortable journey.

Nakhon Sawan Railway Station is located quite far from the town. However, there are tuk tuk in front of the Nakhon Sawan Railway Station to take you to your next destination. Alternatively, you can take the green songthaew at around 10 baht per person. Otherwise, you may have to charter a taxi to your destination. However, taxi costs more minibus.

On the train, there is a toilet for the comfort of the passengers. You can also buy food on the train with price from 100 baht for breakfast and 200 baht for dinner. You can also buy food at Hua Lamphong Railway Station before traveling. Additionally, there will be vendors selling food or snacks on the train while the train stops by at other train stations. Food prices starts from around 30–100 baht. For those who book sleeper train tickets, the staffs will provide a clean pillow and blanket for each passenger. They will also help to convert the seats to bed when night approaches.