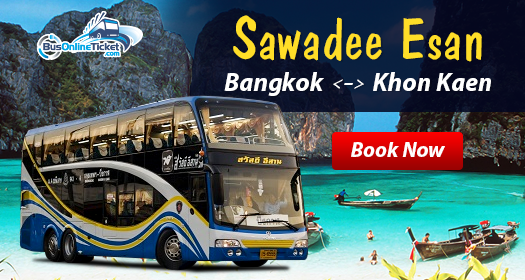 Sawadee Esan is a bus operator company that is based at Mo Chit Bus Terminal in Bangkok, located at Khwaeng Chatuchak. Sawadee Esan has a reputation of providing comfortable buses for its passengers and delivering a fast transportation service to get the passengers to their destination. Apart from that, the buses are mostly air-conditioned and have the variations of being a double-decker bus or a single-tier bus. Because that every bus used by Sawadee Esan is compliant to the safety regulations of the country, Sawadee Esan ensure the safe arrival of its passengers for each trip that they make.

The bus will depart from the Bueng Kan Bus Terminal at a number of scheduled trips daily. However, there is currently only one departure time for the bus from Bangkok to Khon Kaen. Although some of these timings have the tendency to change, here is timing from the latest Sawadee Esan bus schedule from Bueng Kan to Bangkok:

Serving as an additional convenience to the passengers, the Mo Chit Bus Terminal has a lot to offer for any visitors that passes by there. The terminal is located near the Chatuchak Weekend Market and Or Tor Kor Market, so visitors can do some shopping after arriving. In terms of transport connectivity, the Mo Chit Bus Terminal connects to the Chatuchak MRT Station and the New Mo Chit bus station. Also, the terminal is a BTS skytrain station, enabling access to the Sukhumvit Line.

Hurry and book your tickets for bus from Bueng Kan to Bangkok and bus between Bangkok and Khon Kaen with Sawadee Esan now at www.busonlineticket.co.th.