Home » Train from Surin to Bangkok

Train from Surin to Bangkok 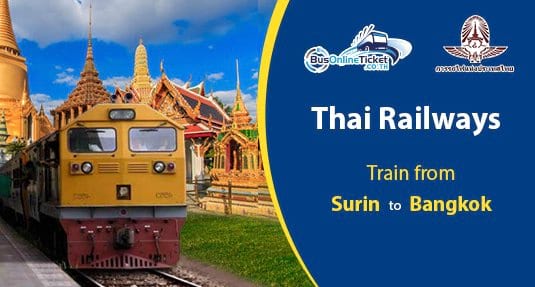 SRT train ticket price depends on the train type and the ticket type that you choose. Below is the SRT train schedule for Surin to Bangkok trains that are available for online booking at BusOnlineTicket.co.th:

The distance between Surin and Bangkok is around 434 km away from each other. The trip duration for train from Surin to Bangkok takes about 6-9 hours, depending on the type of train that you choose. Generally, Special Express train takes the shortest time followed by the Express train and Rapid train.

Surin Railway Station was designed with a simple architecture. Once you arrive, you will find the ticket counter right after you enter the train station. To go to the platform, you just have to pass by the door right beside the ticket counter. At the train platform, there are plenty of seats available for passengers to wait for their train.

SRT trains have toilet on-board so passengers do not have to worry about taking a long train ride in Thailand. In case you get hungry, Express trains and Special Express trains usually have a dining coach so you can get food and drinks while on the journey. Breakfast costs around 100 THB and dinner costs around 200 THB.

Apart from that, there are also local vendors who would go on the train to sell foods during the stops at some train station. Alternatively, you can always prepare or buy food before you board the train. Please note that alcohol is not allowed on the train.

For those who bought the sleeper train ticket, the staffs will help to convert the seats to beds when the night approaches. They will also provide a clean pillow and blanket for all passengers.